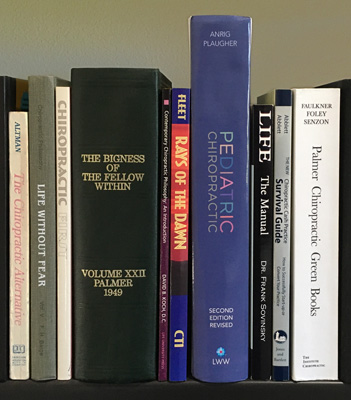 Far too many chiropractors pretty much stop reading books the day they graduate from chiropractic college. Too bad. There are a lot of great ideas and wisdom that have been captured on the written page.

It was Mark Twain who observed, "The man who does not read has no advantage over the man who cannot."

I've read a lot of chiropractic books. I often get complementary copies of books self-published by chiropractors who want to capture their unique perspective on the practice of chiropractic.

Some of these are great. Many are average.

No matter. Ask anyone about chiropractic book writing and they'll tell you that it's far more important to get your book out of you and onto paper than it is to have a bestseller.

In other words, writing a book is usually far more beneficial for the writer than the reader.

As I was contemplating all the chiropractic books available these days, I noticed that it's a far different environment than it was 40 years ago when I was getting my start. A quick review of the books on chiropractic at the Colorado Springs public library back in the early 1980s, in the rather limited section of 615.534 reserved for chiropractic, was pretty dismal. Anchoring the section were but a few titles, mostly devoted to victims of chiropractic and other largely negative perspectives.

But as my own personal experiences with chiropractic invalidated the mostly negative tone I found in my chiropractic book research, I was able to lean into what was to become my career.

What follows, in no particular order, are the 10 chiropractic books worthy of reading—whether you're a chiropractor, a chiropractic assistant or contemplating becoming one or the other.

While I'm proud of my two most recent chiropractic books, Adjusting and "Recalculating!" here are the 10 titles by other authors that have been the most influential in my chiropractic journey.


The Chiropractic Alternative by Nathaniel Altman. This was published in 1981 and was the first positive book about chiropractic I was able to get my hands on.


Life Without Fear by Dr. Fred Barge. Great title by the way. Fear seems to be rampant in our culture. Fear is the emotional and spiritual force standing in the way of success for many chiropractors. And Dr. Barge faces this head on.

As Dr. Barge explores the major philosophical tenets of chiropractic, he makes an important distinction that seems to have been lost in the profession's headlong pursuit of medical approval.

"Chiropractic has never held out a cure for any disease. Recognizing that healing comes from within, the chiropractor works with the body to restore its recuperative power through spinal adjustments. The chiropractor would never seek to cure at any cost; this medical concept is simply not in his teaching and/or philosophy."

If you're not inclined to wade through the green books of B. J. Palmer, Life Without Fear is a quite readable executive summary. The original edition was published 1987.


Chiropractic First, by Dr. Terry Rondberg, was published in 1996. This little paperback was written to be shared with patients. Think of it as an extended brochure about chiropractic.

It's an easy-to-read guide that avoids many of the technical terms that often creep into books written by doctors. It describes the major organ systems of the body, offering simple explanation of their purpose and importance of proper function.

I was asked to contribute a blurb for inclusion on page 3: "Clear, concise and inspirational… every chiropractic patient needs to know that essential information to make better decisions about their health."

Dr. Rondberg is probably best known as the CEO and founder of the World Chiropractic Alliance and editing and publishing The Chiropractic Journal, a monthly newspaper distributed to chiropractors in the 1980s and 1990s.


The Bigness of the Fellow Within, by B. J. Palmer, was originally published in 1949 as Volume 22. It weighs in at 943 pages and can appear daunting to those unfamiliar with Palmer's writing style.

The "fellow within" was how Palmer often referred to the body's innate healing potential, also known to many within the chiropractic profession as "innate intelligence." B. J. considered this fellow a most significant force and the basis of healing occurring from above down, inside out. This is a concept largely lost in today's medical model, which is anxious to give credit to the drug, surgery or intervention as the hero in health restoration.

This is a delightfully eclectic book that consists of a collection of essays and lectures delivered by Palmer to various classes and events at the Palmer College of Chiropractic. You'll not only get a sense of the history and development of chiropractic but also learn about Little Bit O'Heaven and his involvement with the circus and see photographs from inside B. J. Palmer's home.


Contemporary Chiropractic Philosophy: An Introduction by Dr. David B. Koch. If you're not familiar with Stevenson's 33 principles of chiropractic, here's a crash course to get yourself up to speed. If your familiarity is tarnished by the language of almost 100 years ago, then you'll enjoy this update using contemporary language.

Published in 2008, this wonderful little paperback was written while Dr. Koch was teaching at Life University. He brings a fresh perspective to the 33 principles, bringing them up to date with references to quantum physics and the latest scientific principles.


Rays of the Dawn by Dr. Thurman Fleet. The original volume was published in 1948, and a second edition became available in paperback in 2000. I love this book because it captures some of the metaphysics of health and healing. Long before the movie The Secret, there was Rays of the Dawn.

This is a guide that creates a better understanding of the whole person and the constructive and destructive effects of emotions on our health. Through this exploration, he was better able to explain why chiropractic seemed to "work" for some patients but not others.

Dr. Fleet spent most of his lifetime discovering the causes, and corrections, of disease. His journey led him to correlate various philosophies and perspectives into something that he called "Concept Therapy" and "Conceptology." He was able to confirm D. D. Palmer's assertion that there were three causes of subluxation.


Pediatric Chiropractic by Dr. Claudia Anrig and Dr. Gregory Plaugher. The second edition was published in 2013. If there is any doubt as to the value of chiropractic care for our youngest and most vulnerable, this 1226-page, highly referenced text should make such benefits obvious.

This is a comprehensive resource with the contributions of an international panel of 42 experts that read as a Who's Who of chiropractic. Starting with care during pregnancy and the perinatal period, the introduction of subluxation, and clinical and radiological examination, this is the definitive guide to pediatric chiropractic care. Far more than just adapting chiropractic techniques for small spines, this reference explores child abuse, adolescent health, spinal trauma, scoliosis, pediatric nutrition, vaccination issues, and full spine and cranial adjustments.

Starting with the dedication to the late Dr. Larry Webster, the 34 chapters take the reader on a journey that documents the latest developments in pediatric chiropractic.


Life, The Manual: When the Pursuit of Happiness Makes You Miserable by Dr. Frank Sovinsky, was published in 2002. While Frank is no longer with us, his wisdom and humor live on in this immensely insightful and practical success book.

Was Solomon correct when he wrote in Ecclesiastes that all is vanity?

Dr. Sovinsky takes on the all too common disease of success, inviting us to assess ourselves and put something more of substance into our lives. He asserts that there is no outside force that can keep us down. The things that stop us are largely our beliefs and the meanings we've attached to events in our past. Things we can control.

You've probably read many books that include self-assessment tools and questionnaires in which the reader is urged to fill out. I rarely do. However, this is one of the few such books in which I participated. In fact, thumbing through this book in preparation for writing this has inspired me to pull it aside for another read.

Not only is this book a practical guide, it is among the most clearly written and pragmatic advice for chiropractors who wish to avoid the slavery of taking insurance assignment.

I was a little surprised and delighted to discover that yours truly was quoted on page 43: "Admit to the writing on the wall. A whole bunch of very smart people are working 24/7 on ways not to pay you. Accept that it is more likely to get worse than better. In this case, the light at the end of the tunnel is actually a train."

If increasingly reduced reimbursement, documentation burdens and the threat of audits aren't enough to inspire you to eliminate your dependency on insurance assignment, then this book will. Accept the real value of chiropractic independent of what the insurance companies tell you that you're worth.


Palmer Chiropractic Green Books by Timothy Faulkner, Joseph Foley and Simon Senzon. This is the newest chiropractic book on my list, having been published in 2018. The original Palmer "Green Books" were published between 1906 and 1966. Why are they called the "Green Books"? Because the hardcover bindings were green!

This is a big book with 584 pages and more than 600 images, many in color. Not only does it contain a comprehensive review of all 39 Palmer books, but it provides fascinating annotations about what was going on at the time each book was published. The result is a philosophical, theoretical and historical overview of the chiropractic profession during its development.

Do you have your own collection of Green Books? Then you'll find the list of details with color cover images of 123 unique printings and editions of the various Palmer Chiropractic Green Books helpful in determining the value of your collection.

In the age of "evidence-based" practice, this book of "evidence" and facts will help preserve the history of chiropractic. It provides a rare insight into the trials and tribulations of the profession's most revered and reviled chiropractor.