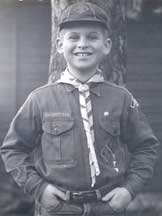 I grew up in Olympia, Washington, just south of Seattle. I remember a wonderful childhood, spending long summer days building forts in the woods.

My brother and I had the good fortune of growing up in a family that instilled a strong work ethic. We didn’t get a television until I was in Junior High School, so we were a family of readers. Every Tuesday after dinner we’d go to the public library and each of us would bring home a stack of books. Later, I went on to work there, first shelving books and then later serving as the Periodicals Clerk.

I enrolled in the first class accepted at the new Evergreen State College in the Fall of 1971 with the goal of becoming an architect. The campus buildings weren't done and the chaos was discouraging. However, as part of my communications studies I landed an internship at KITN Radio, a now defunct local AM 1,000 watt daytimer. It was there that I met radio newsman Jack Dempsey who took me under his wing.

Jack was putting his life back together after a divorce and a bout with burnout. He brought his big city broadcasting skills to sleepy little Olympia. He taught me how to ask questions, conduct interviews with newsmakers and how to write for clarity. Because of him, I found radio so stimulating I dropped out of college to work full time at the station.

When I moved to Denver two years later, I landed a job at a small advertising agency. I was there long enough to put together a portfolio so I could land a job at an even larger agency in nearby Colorado Springs. 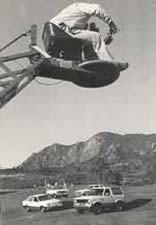 That's where I matured as a writer and met Paul Franklin of International Media Systems, a film production company that I often used to produce our larger-budget television commercials. After six years of advertising agency experience in Colorado, San Francisco and Seattle, I came back to work with Paul.

Soon after I was introduced to chiropractic.

Drs. Riekeman and Flesia of Renaissance International leased the office space next to our production offices. Back then, home VCRs had just come out. Joe and Guy had this idea of harnessing this new medium by creating the world's first chiropractic patient education video. Would we like to participate?

To understand their take on chiropractic, they suggested that someone from our company attend one of their Renaissance seminars. I got the short straw. So, in January 1981 I flew to Spokane, Washington for a three-day chiropractic seminar co-taught by these two incredible speakers and chiropractic visionaries. What I heard "connected the dots" and I fell in love with the principles of chiropractic. I came back and recommended to the rest of the production team that we help them with their videos.

I began my own chiropractic care about a month later. Mostly as a research project. Nonsymptomatic, I didn't have any miracles (that came later), but I could tell after a month or two that my health had improved. I went on to write the Peter Graves, Russell Erhardt and Jayne Kennedy chiropractic videos for Renaissance.

I got an incredible education in the process!

Later, I was invited to be a guest speaker at the advanced Renaissance seminars, launching my career as a chiropractic speaker in 1985.

In 1987 I was approached by Dr. Michael Parrish, a Colorado Springs chiropractor who owned seven, associate-run chiropractic practices. He wanted help with his practice marketing and to upgrade his daily, half-hour, live, call-in TV talk show called Back Talk.

Soon after, Dr. Parrish and I joined with another chiropractor and launched Back Talk Systems. That's when the report of findings magazette was invented. I finally had an outlet for combining my advertising agency skills with my passion for chiropractic. I met a lot of special people and got to travel the world. Occasionally even getting a glimpse that I was making a difference.

This is when I started conducting one-day in-office visits to consult with chiropractors. Over the lunch hour I would conduct a patient focus group (55 of them so far) and find out what patients thought of the practice and procedures out of earshot of their doctor. 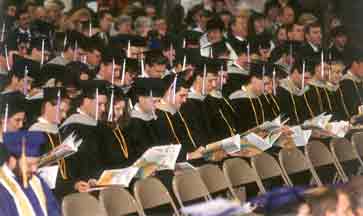 One of the highlights of my career was addressing the February 1995 centennial graduating class at Palmer College. I gave each graduate a copy of Dr. Seuss's, Oh The Places You Will Go which I read aloud during my speach. If you ever need a doctor, I recommend Dr. Seuss!

In April 1999 I sold my half of the old company and started Patient Media. It’s been the most difficult, scary, exciting and fulfilling thing that I've ever done. I have an appreciation for what it must be like to open a new chiropractic practice! As challenging as it can be, I highly recommend "reinventing" yourself from time to time.

Most recently I've become interested in how to best use the Internet to spread the chiropractic message. That has resulted in a collaboration with my Perfect Patients digital marketing business partner Steve Anson in Perth, Australia.

These days, after almost four decades of weekly care, I'm seeing my ninth chiropractor. And since the very beginning, I still pay cash. I've written my 12th chiropractic book, documenting the many facets of the doctor/patient relationship. And traveled over 2 million miles sharing the patient's point of view with chiropractors around the world.

Writing chiropractic practice blog posts and each week sending Monday Morning Motivation, I'm humbled by this incredible profession and the individual chiropractors who scorned the mainstream and chose the hard, narrow, difficult path of chiropractic.

It's an honor to serve beside you.