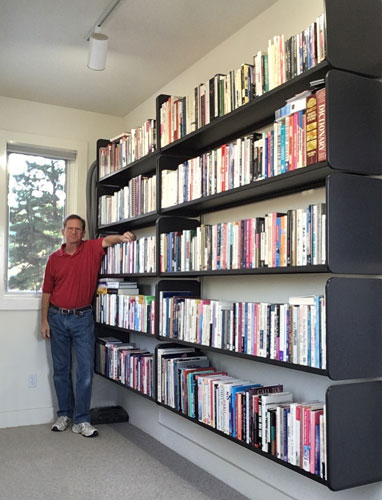 Growing up as I did without television until well into my junior high school years, ours was a family of readers. Among my fondest memories was traipsing down to the Olympia Public Library every Tuesday evening after dinner. Upon our return, the only sound you'd hear was the turning of pages and the ticking of the grandfather clock.

Lacking a formal education, I continue to do a lot of reading. Most of my library contains books on marketing, communications, the Internet, spirituality, health and of course my favorite chiropractic books.

I'm only recently moving from actual books to electronic versions on my iPad. There's just something about the feel of holding an actual book (and being in bookstores) that I find pleasing. But physical books have become a storage problem.

Here are some of the books I've been reading recently.

Patients Come Second by Paul Spiegelman and Britt Berrett. Naturally, after 40 years of being a chiropractic patient and advocate I was startled by the title. However, this is about doctor leadership and employee engagement. And while it explores these issues in a hospital environment, the principles apply equally to your practice. Even if you don't have a support team, the concepts presented will inspire you to upgrade the culture of your practice, while improving patient satisfaction and reducing staff turnover. A business book that is readable, practical; even transformative. November 2021

Mine! by Michael Heller and James Salzman. A fascinating read about ownership. Turns out there are six principles that guide what we consider to be ours. The colorful examples keep this light and interesting. Ballclubs that "own" players and can trade or sell them at will. Who owns the air space when you recline your airplane seat? You don't own a copy of that movie you bought and downloaded from Amazon—it's merely a limited license that can be revoked at any time. Is it true that possession is 9/10ths of the law? Why HBO endorses shared logins. Understand the hidden rules about what's mine and what's yours. And why. June 2021

Not To Scale by Jamer Hunt. Is the amplifier from This Is Spinal Tap louder because it goes up to 11 rather than 10? A garden gnome whose weight differs depending where on earth it is weighed. If humans were twice as tall, simply falling would be deadly. The digital revolution has permitted us to make things bigger, faster, stronger, tinier, heavier and more complex. And with it, the resulting problems of modern life have become so complicated and interwoven, strategies for solving them are increasingly ineffective. Not a reader? Watch the 9-minute Powers of 10 from 1977. May 2021

Privacy is Power by Carissa Véliz. Perhaps because of my age and my own experience with identity theft, I'm a big proponent of privacy. "Why are you worried about privacy unless you have something to hide?" This spellbinding book explains why. Privacy is a requirement for a democracy. It permits intimacy. And more. The author traces our current data economy from the Patriot Act following 9-11 to the more recent plandemic. When you combine 'never let a crisis go to waste,' with, 'those who trade liberty for safety get neither,' and 'if it's free, you're the product,' and you get a feel for what this book is about. May 2021

The Power of Habit by Charles Duhigg. As I’ve spent increasing amounts of time doing telephone consulting and team training, I've become aware of the tremendous power of habituation. Seems like much of what we do is mostly habit. He confirms that an important aspect of breaking an unhelpful habit is to substitute a new, healthier habit. Habits typically include three elements: a cue, a routine we perform and a reward. Duhigg introduces the idea of a "keystone" habit that is often a trigger for other productive or unproductive habits. Lots of fascinating anecdotes. A must read for anyone interested in maximizing their productivity or personal development. April 2021

Loserthink, How Untrained Brains Are Ruining America by Scott Adams. I'd enjoyed a previous book by the creator of Dilbert and thought this one held promise. It's part political commentary, part self-help and part explication of logical fallacies to avoid. He defines 'Loserthink' as unproductive ways of thinking. We hear it from reporters, politicians and pundits on both sides of the political spectrum. I enjoyed his writing style and there were a couple of laugh out loud passages, but not nearly enough of them. He explains the polarization we're seeing in the media, particularly social media. April 2021

Chatter by Ethan Kross. Chatter is another name for self-talk. That voice inside your head that provides an often-unasked-for commentary of our world. Our chatter tends to be unhelpful when we've made a public mistake. It increases the envy when viewing social media. It tends to amplify negative experiences. Thankfully, Kross provides a generous toolbox we can use to deescalate our internal dialog. Among my favorites is to speak to yourself in the second person. This form of distanced self-talk is like the NLP technique of zooming out to make the snapshot of the event small. A great riff on placebo! April 2021

DeepFakes - The Coming Infocalypse by Nina Schick. A deep fake is a type of synthetic media that is either created or manipulated by artificial intelligence. Today, AI is powerful enough to produce videos and other media that make people say or do things that they never did. If you thought "fake news" is a problem, wait until you can no longer trust anything you see or hear. Need chilling proof? The images of people created by this website do not exist—they have all been manufactured by AI. As is this famous Obama video. Say goodbye to "I'll believe it when I see it." Yikes! April 2021

Think Again by Adam Grant who is an organizational psychologist. He invites us to let go of views that are no longer serving us and embrace intellectual flexibility, humility and curiosity. I was especially taken by the chapter on the subject of “motivational interviewing.” For chiropractors facing patients steeped in the germ theory, embracing his insights into asking better questions puts the Socratic method on steroids. I learned about this book from a fascinating podcast interview. Further proof that great communication is more about listening than eloquent speech. April 2021

Futureproof: 9 Rules for Humans in the Age of Automation by Kevin Roose. I became intrigued by an NPR interview with the author. After laying the groundwork by exploring characteristics of robot-proofed jobs (chiropractic, while not mentioned specifically, would be among them), Roose explores nine “rules” for preparing for a world in which AI plays an increasingly larger role—for better or worse. I especially resonated with Rule 3: Demote Your Devices. Here he explains how to break up with your phone. His view is rather optimistic, however a couple of poor decisions and a dystopian future could be on the horizon. March 2021

The Courage to Be Disliked by Ichiro Kishimi and Fumitake Koga. This is a fascinating introduction to the principles of the psychology of Alfred Adler, a contemporary of Sigmund Freud. When originally released in Japan in 2014 it dominated the best seller list for 33 weeks. The Socratic dialogue between the philosopher and the youth is engaging and instructional. Most problems are interpersonal communication problems from either horizontal or vertical relationships. Especially significant was the section on "tasks" which provides fresh language to the concept of boundaries. A must read for all people pleasers, self-sacrificers and those of us who tend to live in the future rather than the present. March 2021

How (Not) to Read the Bible by Dan Kimball. He's picked out the hard-to-explain verses in the Bible and put them into the context of the time they were written. That includes the passages that appear to be anti-women, anti-science, pro-violence, pro-slavery and of course the seven-day creation story—including the talking snake! Absolutely brilliant. He reminds us that the Bible was written for us, not to us. He correctly warns us to be careful about cherry-picking verses, creating doctrine after taking a passage out of its original context. It might even inspire you to pick up a copy of the Bible and crack it open. February 2021

Philosophical Contemplations, Viewpoints on Chiropractic Philosophy edited by Fred Barge, D.C., Ph.C. and Alana Callender, M.S. In 1999 Palmer College created the Philosophy Colloquium and with it the honorary award of the Legion of Chiropractic Philosophers. This volume is a collection of 14 thesis from the 33 participants. The diversity of topics is remarkable, the references impeccable and the thinking process sublime. Innate, dis-ease, educated brain and more, all in 21st century language. If every chiropractor read these 170 pages it would significantly change the profession. Probably the world. February 2021

Mere Christianity by C. S. Lewis. Again, another book that I should have read years ago! I was inspired to dig in after watching a fascinating documentary about his life. This book is a collection of short radio broadcasts on the BBC he made shortly after World War II that he converted into book form. (Seems unlikely that anything so strongly advocating Christian beliefs would ever make it onto the BBC airwaves these days!) My biggest surprise was his apparent acceptance of the evolution myth. Otherwise, it's a thought-provoking exploration for believers and non-believers alike. January 2021

The Complete Works of Florence Shinn by Florence Shinn. A gift from my chiropractor who thought I'd enjoy the metaphysics and use of language like that used by B. J. Palmer. I did. This volume contains all four books, beginning with her most famous, The Game of Life and How to Play It written in 1928. She places considerable emphasis on the power of our words and the value of affirmations. All too often we condemn ourselves or speak untruths about our circumstances that conspire to limit our success and influence. You can clearly see how she influenced Napoleon Hill, Dale Carnegie, Zig Ziglar and all the others. January 2021

Mind to Matter by Dawson Church. I discovered this incredible book after watching a fascinating interview with Dr. Mercola. And his book didn't disappoint. Church, a relentless advocate of Emotional Freedom Technique, has not only developed Eco Meditation and shared it freely with the world, he has also compiled a book for lay people that explains how our thoughts become things. And while this notion is a common theme in chiropractic seminars, the author provides the scientific references that should satisfy even the most hardened critic. His chapter on resonance included a link to a jaw-dropping YouTube video showing 32 metronomes syncing up in just four minutes. January 2021