Thought you might like a report from the front line. It may give you a taste of the future and help you adjust your mindset in the months and years ahead.

This is NOT a criticism of the incredible team that organized The National in Orlando over the weekend. It was a privilege to be invited to speak. The FCA consistently produces a great program that rightfully claims to be the largest chiropractic gathering in the profession. (Thanks Jen, Camille and your super capable team!)

It's something of a miracle that Florida was opened enough to permit such a gathering, delayed from its usual August date.

Air Travel in a Time of Covid 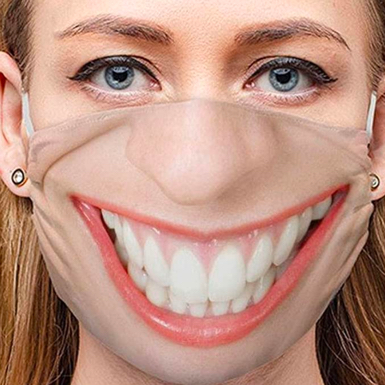 Getting to Florida for my speaking gig meant air travel from Colorado. It was my first visit to the Denver International Airport since March when I returned from speaking in England. Back then, you'd see only a handful of the most fearful travelers wearing face coverings. Of course now, everyone is expected to.

And what a fashion statement that's become!

I dislike the mask mandate. Not just because it fogs my glasses. It represents a capitulation to the fear mongering from the media. Imagining that the ill-fitting  bandanas, double-knit mesh and all manner of novelty masks, shields and face coverings are somehow affecting the transmission of the 125 nanometers (0.125 microns) sized virus is the placebo effect in full bloom.

Boarding the aircraft has changed too. Instead of front to back, it's back to front. Any prestige afforded first class cabin passengers or even premier economy fliers to secure coveted overhead bin space has been abandoned in favor of the illusion of social distancing while boarding. 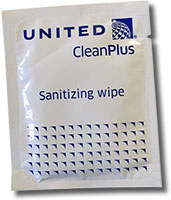 But not before getting your sanitizing wipe (for external use only).

Issued to each patient upon entering the aircraft, the purpose of the 70% isopropyl alcohol single-use wipe is to apparently complete the cleaning procedure that allegedly occurs in the brief moments between arriving passengers disembarking and departing passengers boarding.

A year ago, these same passengers would fiddle with the air vent, turn on the overhead light and fuss with the arm rest with complete abandon. Not today. The environment is perceived as threatening and your seatmates are suspiciously culpable by merely exhaling carbon dioxide in your presence.

While it's not as long as flying cross country, the flight to Orlando from Denver is over three hours. It only seems like five because of the stupid mask and the ever present oppressive germaphobia. And the mask doesn't come off when you land. Or take your Uber. Or arrive at your hotel. Or head to the convention center.

Exhibitors and chiropractic assistants who are new to chiropractic and attend gatherings like this for the first time often remark that "chiropractors are huggers." Yes, there's lots of touching when chiropractors get together. (Which is even more pronounced when chiropractors in French Quebec, Canada meet because of the additional kissing involved!) The virus has put the brakes on this social custom. Or at least made everyone a bit more self-conscious about it. 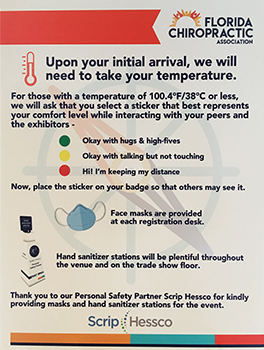 There were two new procedures introduced at registration when getting the name badge needed for entry into the event.

1. Temperature. Every attendee's temperature is taken. Evidently this is to prevent knowledgeable, actively-practicing health care professionals from entering the event while seemingly unknowingly fighting an infection. Thankfully I was admitted after the full day of traveling.

2. Risk Threshold. Then, since a chiropractic convention is apparently a contact sport, each attendee is asked to declare his or her tolerance for any potential opportunity that might arise. This is done by choosing one of three colored stickers which is then applied to your name badge.

Green = Okay with hugs and high-fives
Yellow = Okay with talking but not touching
Red = Hi! I'm keeping my distance

I know. Tell me again why we're meeting in person and not doing this over Zoom?

There's a lot of inertia involved here. Chiropractic conventions, when supported by the profession, are generally money makers. Even more so in states in which certain mandatory hours can only be obtained by events hosted by the state association.

These meetings are expensive to hold. Hotels have learned that they can charge enormous fees for the use of their ballroom and require the purchase of food and beverages. (That's the "free" coffee in the mornings and the evening happy hour in the exhibit hall.)

On top of that, they force the group to guarantee to fill a certain number of sleeping rooms in exchange for access to the meeting space. (Be sure to mention XYZ Convention when booking your room.) And the registration fee you pay to attend? It's merely a down payment. The lion's share of the seminar cost is often born by vendors who pay large sums for the tiniest amount of exhibit hall real estate, and with it, the chance to potentially meet you as you run the gauntlet.

The point is there can be tremendous financial pressure to continue holding these meetings. Even though the premise on which they are based is flawed and there are far more effective ways of disseminating the information. If in fact, that's the intent.

Oh, the flawed premise? That better doctors are produced by forcing them to be in physical proximity of a lecturer sharing some esoteric or arcane clinical information. And then having their badge periodically scanned to prove they were within earshot for the requisite number of hours.

Never mind many were reading the newspaper, watching a football game, texting or watching Netflix. Their body was there. Too bad their mind wasn't. 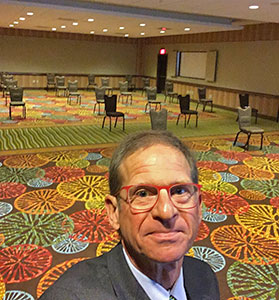 My speaking slot was at 8:00 AM Saturday—the morning after the night before. And since what I present doesn't always qualify for CE credit (at least not in Florida) I'm in a smaller breakout room. Which I don't mind. Since the prospect of getting relicensure hours isn't part of the bargain, I tend to get an audience that wants to be there. And they are inclined to sit up front rather than fight for the back row closest to the door.

While the fire marshal would have permitted 121 people in Bayview 21-22, social distancing meant it was set for 28. The chairs were spaced sufficiently apart to prevent cheating on the exam. (Just kidding. There was no exam.)

Anyone with the most rudimentary understanding of energy management knows that such spacing means it takes far more energy to fill the room. Ironic, since experiencing the energy is one of the reasons we get together in groups. It's why we go to live concerts, even though the music sounds better on the CD.

I was delighted that by 7:55 AM at least one doctor had joined me in the room. Later, a few more trickled in until by the end I had an audience of seven chiropractors.

When my 100-minute presentation was over I thanked the audience, unplugged my computer, applied my mask, hiked back to my room to pack my suitcase and process what I had just experienced.

The Tension Between Touch and Technology

Of course, the challenge is there are three potentially competing forces at work here. There's the relicensure aspect, the financial implications and the social dimension. I confess that I don't have any breathtaking solutions as this is outside my wheelhouse. However, I would remind those who rely on these sorts of meetings that changes are coming. In the same way traditional colleges and universities are being confronted by technological innovation, so too will state associations. In fact, it's already happening.

The truth is, if conveying knowledge is the objective, there are countless ways of using technology that are faster, cheaper, more convenient and even hold the promise of testing for comprehension.

What seems most unresolved is how to replicate the social dimension of these sorts of get togethers. Back in the 1970s futurists John Naisbitt and Alvin Toffler pointed out the tension between touch and technology. As we increasingly rely on technology there must be enough compensating touch. Since the trajectory of our culture is increasingly towards the use of technology, it suggests that the high-touch aspect of chiropractic has a promising future.