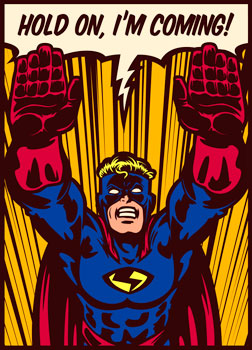 Got a call last week from a frustrated chiropractor. That’s not particularly unusual since many of the chiropractors who reach out to me are frustrated.

What made this call different wasn’t his plight, but the solution he was considering. He wanted to discuss it with me before making the financial leap.

Turns out his frustration with low patient volume and patients dropping out as soon as they felt better, had caused him to entertain an overture from the “Rescue Squad.”

That’s the name I’ve given entrepreneurial chiropractors who know precisely what buttons to push to get you to surrender your last-hope dollar. It usually involves purchasing some type of gadget, an online course or a way to sell non-chiropractic services. You know the list. Stem cells. Smoking cessation. Weight loss. Laser healing. Water purifiers. Lifestyle coaching. Etc. Anything, but the promise of real health by reducing nervous system interference.

Apparently, the idea is to disguise one’s identity as a chiropractor and lead with something unrelated to nervous system integrity. Then, when a certain amount of trust has been created, up-sell them to chiropractic.

Most of the attempts at rescuing chiropractors overlook what put these practices into a downturn in the first place. Often they are introverts. Often they were misled, believing that practice promotion wouldn’t be necessary. Many have a limited, allopathic approach to chiropractic.

Introverts, which being one gives me a bit of appreciation, seem especially vulnerable to the magic pill, shortcut, secret sauce and the “just-add-water” offers that cascade into email inboxes these days. Between not having to do anything but buy the program (in three easy payments) and the money back guarantee (it must really work), it’s enough to lower the defenses of even the most hopeless chiropractor.

Yet, visit chiropractic practices and pull out their drawers and open up closets and you’ll find the jetsam and flotsam from previous stillborn offers. Like an archeological dig, you see layers upon layers—remnants of dashed hopes and discarded dreams.

So, how did I help the doctor with the under-performing practice that had his credit card are the ready?

First, I reminded him that an outside-in solution is rarely the answer. Health, whether in a human, or in a practice operated by humans, comes from the inside out. It NEVER happens the other way around. It’s almost always a sign of not being able or wanting to adapt to one’s environment.

I know. It’s so handy to point to something “out there” as the problem. Trouble is, there’s little you can do about what’s out there. The only real control you have is in here. Where you must confront yourself. And grow.

Here are some of the suggestions I offered. Perhaps they will be helpful.

1. Health care versus pain relief. Embrace the distinction that there are patients who want health care and those who merely want pain relief. If you wait like a spider, hoping someone will show up, rest assured their motive is what the culture has taught them about seeing a chiropractor. That’s for an episode of back or neck pain. They’re rarely interested in optimum health. These aren’t bad people. It’s just that enlarging their vision to embrace chiropractic care as a long-term lifestyle adjunct is, well, unlikely. Attracting the health conscious is covered below.

2. Understand today’s financial fragility. More and more people are leveraged to the hilt. They’ve refinanced their homes to pay off credit cards; only to run up the credit card balances again. Many have little or no financial margin in their lives. A bad transmission or unplanned episode of back pain aren't in their budget. Granted, there’s little you can do about this other than adding Care Credit and ChiroHealthUSA to your payment options.

Combine living paycheck to paycheck, with the $5,000 deductible of their so-called health insurance, and their pesky back pain needs to be resolved as quickly and cheaply as possible.

Meanwhile, the health-oriented folks who drive past your practice because they think of you as a back pain doctor are often flush with cash. They’re paying extra for organic produce and grass-fed beef, getting the mercury removed from their mouths, buying household water filters and buying supplements at Whole Foods. All without expecting to be reimbursed by a third party.

3. Emerge from your social cocoon. Chances are if your practice is running on fumes, you’ve become increasingly isolated. It happened so slowly you probably didn’t notice. Or, after a decade of paying your dues, mingling with strangers and non-believers is, well, uninteresting.

The point is you rarely encounter strangers anymore. You frequent the same places to eat, same dry cleaner, same gas station, same everything. Getting new patients is about telling the chiropractic story to as many strangers as possible. There are countless tactics for doing so. From lectures, screenings and talks to social media, blogging and a robust website. While a personality transplant isn’t doable, getting to Toastmaster group, forcing yourself to meet new people by doing volunteer work or getting active in your church is.

Oh, too much work? I get it. But did you think stem cell patients were going to show up without lifting a finger?

4. Become familiar. The way to begin attracting people who actually want better health is to participate, contribute and be generous with those in your community already attracting the healthy people you’d like to see. These are the people who frequent health food stores, Pilates studios, the running club and countless other tribes. Join the clubs. Attend the meetings. Contribute. Become familiar. Please, no “be my patient” overtures! Simply enlarge your network and be ready to share. The new patients come later. You have some trust to build and dues to pay first.

5. Polarize. Magnets attract at the poles. If you want to attract you must polarize. Which is difficult if you’re toeing the line of political correctness or afraid every patient is a flight risk. Patients simply aren’t attracted to beige. Boldly plant your flag and share your truth. I’m guessing most of your patients are clueless about your stance on fluoride, vaccination, Keto, breastfeeding, dairy, diet soda, spanking, spirituality or homeopathic remedies. To attract you must be willing to repel. Otherwise resign yourself to mediocrity and regret.

6. Show up curious. Authentic curiosity can be a powerful attractant. It requires that you set aside pride and the need to be right. It means you’re actually interested in the other person. It requires the willingness to truly listen. The busiest chiropractors demonstrate this capacity by being masters of asking questions, seeing their role as collaborative rather than parental or heroically “fixing” patients. They are as interested in the meaning patients are making of their circumstances, as they are in delivering spectacular adjustments. By showing up nonjudgmental, you build high levels of trust and honesty—which is where deep, lasting connection occur. It requires trusting the patient and taking an eternal view of the relationship.

7. Express your gratitude. If you’re like most chiropractors sniffing around the offerings of the Rescue Squad, you’ve shown up moody, distant and preoccupied. This little pity party of yours is off-putting to patients and especially your staff. It’s a luxury you simply can’t afford. You must love on patients who show, rather than becoming offended or angry with those who don’t. Stop consuming media, whether social or mainstream. The former invites you to compare yourself with others. The latter holds you in bondage with fear. Be thankful of what you have—even if it isn’t everything you want. Be grateful for your talent, knowing the truth and the skill to operationalize both with patients.

If you were to embrace these seven suggestions you would have little interest in the seductive headlines shouting from the pages of chiropractic publications or the alluring subject lines in your inbox.

And while all of the offerings of the Rescue Squad may be good in their own right, I can’t help but think that they’re often used as a substitute for discipline and creativity.

Yes, there is a faction of the public that turns up their nose when confronted with the word chiropractic. And if it seems like hiding your chiropractic identity behind some new high-tech modality is the answer, dig deeper. Could it be that you’re actually tired, bored, embarrassed or ashamed? You can’t buy your way out of these. Try, and you simply enrich those who prey upon unfulfilled dreams.


Helpful? Too harsh? Let me know.