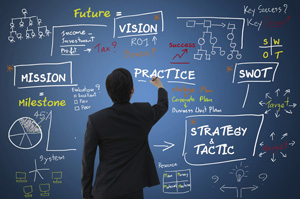 Being involved with several different businesses supporting the chiropractic profession, I can’t help but notice that there is a dispiriting oppression hanging over many chiropractors these days.

There are several theories about why this is. Some mention the weak economy, localized high unemployment, the rejiggering of health insurance under Obamacare, the introduction of ICD-10, the uncertainty over the impending U.S. election or some combination of all four.

These are easy-to-identify rational reasons for the erosion in patient volumes and chiropractor incomes. But I think there is a far larger crisis that trumps them all. I believe this because there are some chiropractors making a ruckus, taking names and are busier than ever. Same town. Same insurance companies. Same economy. But different outcomes.

What is it that permits some practices to thrive and others to hesitate? It’s because they have a vision. A dream. They have the ability to visualize a better tomorrow and are passionate about seeing it manifest.

Do You Have a Vision?

This insight became glaringly obvious during a recent one-hour telephone consultation. This particular chiropractor’s future was obscured by fear. Which, incidentally, is where fear resides—in the future. Fear can manifest when we project ourselves into the future, abandoning the present where we have power and influence, in favor of the imagined future where we don’t. Yet. Until the future is the present.

“So what’s the vision you have for your practice three to five years out?” I asked.

If you’re not fully invested in the community you practice in, you’ll be less inclined to make the emotional commitment needed to start relationships, invest in the future and stake your claim. Without it patients are merely spines and practice is merely a paycheck.

As a result, new patient acquisition strategies tend to be limited to the easiest, lowest hanging fruit. Overtures whose payback may require months or even years to manifest aren’t pursued. This further contributes to a desperate hand-to-mouth existence, which is not only stressful, but has a limited future.

What’s Your Vision For the Future?

Permit me to remind you that merely surviving isn’t a vision. Surviving rarely gets you inspired to show up as your best and dream audacious dreams. Surviving, so you can pay your bills and keep your practice going won’t bring out the best in your team, prompt patients to rave about you and tell others or cause you to be the enthusiastic leader everyone secretly wants. Survival is playing small; doing the bare minimum, fearing that a fuller, deeper commitment will make you look foolish, won’t produce a return your investment or will be wasted effort. Which happens to be the perfect formula for an under performing, slowly eroding practice.

If you don’t have a vision, you’ll want one.

But you can’t go to the Vision Store at the mall. It must be your vision. Store bought visions handed down from a coach or copied from others will rarely do. It must be uniquely yours so it can feed your soul, inspire you to take risks, make difficult choices and see you through the predictable challenges. It almost always requires going back to the beginning and reminding yourself why you chose to become a chiropractor in the first place.

Five Strategies For Capturing Your Vision

If you recognize the importance of identifying a compelling vision for you and your practice, here are some suggestions to consider during the process of uncovering your source of passion:

1. Differentiate or die. Perhaps it’s the effect of being marginalized or thought of as a second class health care citizen, but there seems to be an overarching desire for many chiropractors to fit in, and be as beige (and supposedly acceptable) as possible.

These days, to fit in is to become invisible. There are a lot of ways this occurs. It could be your repertoire of services, your ordinary office environment, your mid-range fees or even biting your tongue when patients reveal their ignorance. The “I’m-just-like-the-chiropractor-down-the-street-but-$1-cheaper” is hardly a competitive advantage. In fact, selling your services on price is practically a neon sign screaming, “I’m just a commodity.” The opposite of differentiation.

What many forget is that most people think you’re a kook. After all, you chose chiropractic as a career path! So when you try to show up buttoned down and medical-doctor like, posing, it’s inauthentic and unattractive. Differentiation isn’t about being something you’re not. It’s about being uniquely you.

A contributing lie that many believe goes something like this: “If I revealed who I really am, no one would like me.”

That’s not true. Being authentically and uniquely you is the only way someone can like you!

2. Identify an under served market. One of the strategies to help identify your vision and capture your imagination is to single out a segment of the population for which you have a special affinity. These might be special needs children, pregnant mothers, skeptics, athletes, runners, pediatrics, geriatrics, women, those threatened with back surgery, the obese, car accident victims, etc.

Another strategy is identify a particular health complaint. Perhaps you have a special fascination for scoliosis patients, those suffering from fibromyalgia, headaches, fertility issues, diabetics and the list goes on.

Of course. But realize that type of generalization has relegated you to being a nondescript back doctor. When you focus on a particular segment of the population, based on a demographic, psychographic or health complaint, you create a way to become remarkable; a new way for your community to think about you and tell others. “She’s not like other chiropractors…”

3. Become world class. As the Internet has made the planet smaller and Google has created a pecking order of chiropractors in each locality, it’s crucial you’re seen as world class at something. With the top three search listings taking the lion’s share of Internet clicks, being best in class is essential.

As you differentiate your practice, separating it from the common, run of the mill chiropractic practice, you have the opportunity of broadening your patient base.

This isn’t a new idea. Dr. Gonstead drew patients from all over the world. So much so he built an airplane landing strip and a hotel to accommodate his international clientele. Others, such as B.J. Palmer, whose expertise and reputation extended beyond the city limits of their little towns, enjoyed full reception rooms and an unquenchable demand for their services. All because they became known for their specialty, expertise and healing gifts.

What can you become world class at? Your ability to help certain health issues? Your success with difficult cases? Your ability to explain chiropractic in a compelling way? Your diagnostic prowess? Specifically, what part of patient care is the most fascinating? What aspect of chiropractic stirs your heart? Vow to become the best at something.

4. Fight an injustice or right a wrong. Chiropractic, because its philosophy is so different from the prevailing allopathic mindset of our culture, has always attracted the rebel, the renegade and the nonconformist.

Chiropractors used to be the feral ones. The unpredictable. The outspoken. The wild ones. Today, most have been domesticated and defanged. Remember, even when 300 million people believe a lie (allopathy), it’s still a lie. If you’ve been running with the I-just-want-to-get-out-of-pain crowd, you may have been deceived into believing that there just aren’t enough people who want true health and have the resources to pursue it.

But, they’re out there. And since you’re seen as a back doctor, they pursue their own path to health at the health food store, the yoga classes, the Pilates workshops and other small tribes in your community.

Give up the beige, going along to get along and fitting in with the establishment. Take a stand for the truth. Take a stand for trusting the wisdom of the body. Take a stand for natural. For self-responsibility. Confront the prevailing beliefs that fatten the corporate profits of the medical-industrial-complex, the GMO purveyors and the others who have medicalized virtually every sign and symptom and turned the public into mindless sheeple.

Provoke critical thinking. Become an advocate for some aspect of natural health. At this very moment within the drawing area of your practice are people contemplating a back surgery, taking a liver-damaging drug and getting radiated and poisoned due to cancer and all the rest of the contemporary versions of bloodletting.

5. Stop watching the news. Finally, there is little way you’ll be salty, spicy and unique if you’re consuming the same fear-mongering messages in the media as your patients and prospective patients. You simply can’t show up as a beacon of hope and healing if you’re hypnotized by the news, which is designed solely to attract eyeballs that can be sold to advertisers. How do you attract eyeballs? You create as much fear, uncertainty and unsettledness as possible. Or you go for the lurid, obscene and broadcast the less heroic of our human nature. Either way, dieting, even occasionally, on the empty calories dished up by the always on, 24-hours-a-day news cycle will constrain and diminish your spirit. It probably already has.

Unplug. Whatever is going on in Washington or Paris or the crisis du jour is largely out of your control to do anything about. So it infects you with a spirit of hopelessness and a victim mentally. Instead, make your community better, stronger and more resilient by rising above the noise and fear.

If they “drop the big one” or something really significant happens, you’ll learn about it soon enough by someone who has turned his or her life over to the Borg.


Your Practice Is Waiting For Leadership

You don’t have to create a vision for your practice. You’ve probably survived all these years without one. However, if you want to be in, but not of; if you want to rise above the average and become exceptional, make sure you and every member of your team knows, understands and is willing to put their back into crusading for your vision. Providing a picture that inspires and creates the hope of a better tomorrow is the most fundamental aspect of leadership.