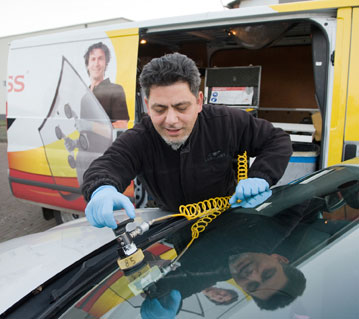 It starts with the tiniest pit on your windshield. Probably a stone thrown from the back tire of a car in front of you. If the blemish is less than an inch in diameter, it pays to have it repaired promptly before Colorado's wide temperature swings cause large, irreparable cracks. In fact, these little repairs are so effective at preventing further damage, insurance companies will often pay the entire cost of the repair.

It's kind of amazing. When the repair is complete, you can't even see where the damage was. Your windshield is crystal clear.

Many patients think their episode of chiropractic care is doing something similar for their spine. They have an ache or pain and expect that a couple weeks of adjustments will have them feeling great and as good as new. Like a windshield.

Similarly, there are chiropractors who believe that they're "fixing" patients. But they're not. They usually have an emotional response when I suggest that they tell patients the truth. Something like:

"You're in the right place. We've helped a lot of people with problems just like yours. And while relief from this sort of thing is practically routine, you actually have a problem that is going to require some type of ongoing supportive care for the rest of your life.

"I know that's not what you wanted to hear, but based on the pictures we took of your spine, you've had this problem for some time. Probably years. Long before your symptoms appeared.

"The resulting scar tissue and ligamental damage has created a permanent weak spot in your spine that is likely to act up from time to time, based on your stress levels.

"But, first things first. Let's tackle this aggressively and get you on the mend. That's going to require a series of adjustments, spaced out every other day or so, to create the momentum necessary to make the spinal changes that we can. Later, as you improve and your spine stabilizes, we should be able to reduce your visit frequency."

While that's no guarantee that a patient will stick around and become a once-a-monther when their symptoms subside, at least when their symptoms return in the future they are less likely to blame you. Or claim, "I tried chiropractic but it didn't work."

Many chiropractors who think they "fix" patients have this belief affirmed because they get so few reactivations. Which can be explained by (1) patients deciding to try acupuncture when their problem returns, or (2) patients finding extricating themselves from the practice so shameful they decide to find a different chiropractor for their relapse.

I know this is a broad generalization, but consider this:

Rather than consulting you at the first sign of spinal distress, patients wait. Their body adapts.

Then, they take an over-the-counter pain medication. Life goes on. Maybe years pass before their self-medication strategy is no longer adequate. Eventually, they may consult a medical practitioner, and the muscle relaxers are able to extend their ability to endure the discomfort still longer.

Finally, they show up in your practice. The pain or the side effects are no longer tolerable.

I don't think so. The growth plates are long gone. The original cause is often forgotten, and the soft tissue damage is well entrenched.

Your chiropractic care is likely to provide some palliative results, but the retraining of muscles and ligaments? Not possible with the dozen or so visits doled out by a stingy insurance company. Even if a patient is willing to perform mirror image exercises or submit to traction, the original pattern returns should they stop.

The exception? Newborns and children. Unlike adults with long-established spinal patterns, children rarely have the scar tissue and muscle memory from years of aberrant biomechanics. They hold a far greater promise of true correction—"fixing," if you will.

As I see it—and remember, I'm not a chiropractor—there are a handful of issues in play here for many chiropractors:

1. A less-than-accurate model of what's going on with muscles and soft tissues.

2. An overestimation of what an adjustment is actually doing.

3. Withholding patient explanations for fear that patients are a flight risk or unable to handle the truth.

4. Being deceived by the patient's symptomatic improvement, and assuming the results are permanent.

I've reached this conclusion based on a little experiment. Of one. Me. Granted, there's no control group, but it's all I have to work with. Well, that and consulting with hundreds of chiropractors.

When I began chiropractic care on a nonsymptomatic basis in 1981 at the ripe old age of 29 while doing research for the first chiropractic patient education video, I was given a Chiropractic Emergency Card listing the areas of my spine not behaving optimally.

Now, 39 years later (almost to the day), after the skillful intervention of nine different chiropractors on at least a weekly basis and in the process spending about $154,200 for the privilege, I'm still asymptomatic, and I still have the same basic spinal listings.

What are the odds that I chose nine chiropractors with inferior adjusting skills? Unlikely. Far more probable is that those 2,000 adjustments helped me accommodate the various physical, chemical and emotional stresses in my life.

Would I be in this good of health in my late 60s had I not made such an investment? Hard to know. Like I said, this experiment has an N of 1.

My point? Most patients think they have a spinal owie that, like a cut, infection or some other commonly self-resolving problem, will clear up, and they will be as good as new. Like their windshield.

Instead, they have a permanent weak link, a spinal "stain" that is unlikely to return their spine to its original manufacturer's specifications.

Hey there Bill, I'm a chiropractor and I read your article, and unfortunately I'm not here to say you're wrong. There are many many chiropractors that see patients way too frequently and for far too long.

I am a pretty new chiropractor, having only been in practice for two years, and there is a definite split in the profession - old school vs. new. The old school way is what you wrote about, and the philosophy is changing from that. I, as many other young/new doctors are more here for acute care and don't keep people coming back for the rest of their lives. I try to get people better as fast as I can, and I don't claim to "fix" or "cure" anything as small as one little problematic spot on your spine. I look at a normal activity that's being interfered with like getting dressed, looking over your shoulder while driving, etc., And just try to make that better. Then give at home exercises and whatnot to keep it that way. Once they're back to normal, I tell them come back if you hurt again.

I could go on forever, but you get it. Like I said, unfortunately, you're not wrong, and it bothers so many of us in the profession to have colleagues like that.

Just keep in mind there are chiropractors that don't expect you to come back a million times throughout life. Only problem is for every one of us there's ten quacks with sales pitches you have to sift through.

Thank you for having your contact available and taking the time to read this.

First, this isn't about old versus new. It's about chiropractic versus medicine. Using chiropractic as physical medicine or treating conditions is a relatively new, off-label use of chiropractic. For over a century it was about the nervous system and restoring one's ability to adapt to the environment—not joints and bones. Certainly it can be used for that purpose, and increasingly is. And make no mistake. You can help a lot of patients delivering adjustments to treat conditions. In fact, most patients steeped in the outside-in medical philosophy would be quite congruent with a "catch and release" philosophy. No problem. Granted, you do have a voracious appetite for new patients without the social authority of a medical doctor.

The other distinction I'd make is about "chiropractors that don't expect you to come back a million times throughout life."

I'm assuming you're not anti-teeth brushing. Or anti-flossing. Or anti-bathing. These and countless other ongoing strategies help maximize the usefulness and longevity of our body. And while helping patients resume activities of daily living produce appreciative patients and reimbursement from insurance carriers, it's merely symptom treating. Inspiring patients to attend to their spine on some type of regular basis—without shame, guilt or fear is an even higher calling. Granted, the number of people so oriented is somewhat limited, but it too is a contemporary mindset. The same one that has prompted Wal-mart to stock organic fruits and vegetables and antibiotic-free meats. My point is that explaining the value of some type of ongoing chiropractic care on a nonsymptomatic basis isn't exploitation or over utilization. It's merely an acknowledgement that 1) their problem wasn't permanently fixed and needs to be supported, and 2) the effects of emotional stress and the relentless effect of gravity produce a burden on the body that is more wisely addressed prophylactically rather than waiting for obvious symptoms requiring a longer and probably more expensive course of care.

Thanks for reaching out and allowing me to clarify.