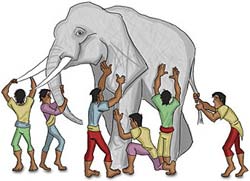 Is the future of the chiropractic profession more likely assured by being evidenced-based-treatment-for-skeletal-muscular-maladies-by-restoring-proper-spinal-biomechanics or by being a vitalistic-art-science-and-philosophy-addressing-whole-body-health-by-invoking-the-self-healing-qualities-imbued-in-all-living-things?

Which model best serves the patient, the chiropractor, the profession, and the planet?

If you’ve had your head down, applying chiropractic principles to patients, trying to get paid by insurance companies, and running a small business, you may not have had the time (or interest) to explore such questions. That’s understandable. But crunch time is coming and you’d want to know where you stand on this issue.

Crunch time? Yes. In the United Kingdom, Australia, Texas, New Mexico, Connecticut, Nova Scotia, and elsewhere, chiropractic is under attack. Frequently these attacks come from within the ranks of fellow chiropractors who are embarrassed by the “philosofooy” crowd and subluxation-based chiropractors and favor the more “enlightened” view proffered by research, peer review and consensus.

Most patients (and insurance carriers) see chiropractors as spine doctors. Both look through the allopathic lens of symptom treating, seeing the body as a collection of parts that break down independently of the others and the objective as being symptom-free.

Conversely, chiropractors who practice in a way congruent with the principles of chiropractic see themselves as facilitators, guides and allies. Their holistic view of the body helps them appreciate that each of us is greater than the sum of our parts. Each of us is an experiment of one and the objective of care is to help patients adapt to their environment and express their fullest potential by removing interferences. (Impossible to do a double-blind study if we’re each experiments of one!)

You can see why this creates a schism within chiropractic. And why reaching a compromise satisfactory to both parties is so difficult.

The easiest path, the path of least resistance, is to fall in lock step with the “big dog” and the cultural notion of health care as symptom treating. Insurance companies live there. So do the drug marketers who use the media to convince the public of their pill-for-every-ill messages, indoctrinating an instant gratification public with an easy solution to their ache, pain, sleeping difficulty, or other medicalized problem. At first glance, presenting chiropractic in a way acceptable to this model would hold great promise. And probably why many chiropractors do.

Turns out both views about chiropractic are correct. It’s not mechanism OR vitalism. It’s mechanism AND vitalism.

It reminds me of the blind men standing around an elephant, each adamantly describing an elephant as a spear (tusk), a snake (trunk), a fan (ear), a tree (leg) or a whip (tail). Each one is correct, but each overlooks the bigger picture.

Long before insurance “equality,” chiropractic survived by being different. Chiropractors appealed to those who had a general distaste for doctors, who were suspicious of pills, and who wanted a natural approach to better health. That audience is still around; in fact, it’s actually grown, thanks to the aging baby boom population.

Where is chiropractic? Still chasing headaches, back pain and anything else a stingy insurance will reimburse for.

Being different, and not merely a me-too version of “medicine lite,” is the access to a thriving practice. After all, if grocery stores figure there’s a market for the more expensive and often less attractive organic produce (no third-party reimbursement here!), it seems that ‘tors would find more than enough resonance in their community for the essential premise of ‘tic.