The Allure of Offering Pain Relief 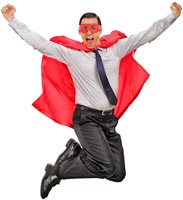 While ruminating after a recent one-hour telephone consultation, it occurred to me that I might have missed an important aspect as to why some chiropractors choose to practice what is primarily a mechanistic, pain relief model of chiropractic.

This particular chiropractor was no longer happy practicing this way.

“I never know whether I’m going to have a good day or a bad day,” he confessed. “It all depends upon who shows up and if they’re happy with their progress.”

Naturally, this is the result of accepting patients on the basis that you will relieve their pain. Which is the reason many consult chiropractors, but it’s a risky basis to begin a relationship when you’re actually relying on reviving the patient’s ability to self heal. Plus, patients can knowingly or unknowingly sabotage your intent based on what they do or don’t do between visits.

Frankly, if all a patient wants is pain relief, medication is faster and cheaper. (My guess is that if you dig deeper, they want more than just pain relief.) Offering adjustments to treat their pain, without explaining that chiropractic doesn’t treat pain, is like taking a knife to a gunfight.

Nevertheless, 80% to 90% of patients do get the pain relief they seek. And while respectable, it pales in comparison to the 99.9% (or higher) success rate seen with Vicodin or Oxycotin. Solely as a treatment for pain, chiropractic may be promising, but limited. That was never the intent of chiropractic. Even though countless chiropractors have turned the Big Idea (arousing the life force) into a small idea (pain relief).

And it’s not only due to the medical education of chiropractic colleges, the dictates of the CCE or the result of sucking up to insurance carriers. Turns out there are two profoundly emotional payoffs that make a biomechanical pain relief model of chiropractic attractive.

The first emotional payoff is the seduction of being the hero when patients get the relief they’re seeking. The false humility (“All I did was remove the interference.”) is a nice touch, but rarely covers up the deep emotional satisfaction from the appreciative gushings of patients. “You saved my life!” “I wish I’d found you sooner!” “You truly have golden hands!” “We’re going to name our next child after you!”

Okay, patients rarely name their children after their chiropractor. But when you show up as the remover of pain, and you’re successful, patients can laud you with considerable adoration. Especially, if you’re lucky enough to pull off the feat in only a visit or two. But it’s this luck thing that has you by the short hairs. Because while 80% to 90% may be satisfied, it’s the unimpressed 10% to 20% who can ruin a perfectly good day.

Since many chiropractors believe that patient results emerge from the chiropractor’s adjusting prowess, it’s tempting to blame oneself when results don’t manifest. This prompts some to go technique shopping for still one more way they hope can get them closer to 100% results. This, when a more likely explanation is that the patient refuses to change their lifestyle, or the emotional or chemical stressor is still present in their life.

Take this personally and you’ll never enjoy the peace or the certainty you deserve.

The other emotional payoff when limiting chiropractic to the biomechanics of pain relief is the emotional detachment it affords the chiropractor.

Granted, most chiropractors are an expressive bunch who often share the capacity-limiting habit of getting their social needs met at the practice. However, there are some who find the intimacy of discussing a patient’s real-world concerns to be far too personal. They assume a “professional distance.” Which is another way of saying they show up somewhat aloof and almost indifferent to anything other than clinical concerns and the patient’s subjective complaint.

This is the “how-are-you-feeling?” crowd. Making chiropractic about symptoms, while the path of least resistance, comes with a catch—you need a constant stream of new patients—without the social authority of being a medical doctor. Combine this with larger and larger insurance deductibles and practice becomes increasingly stressful.

When someone “gets” cancer, they don’t just have a tumor. They’re cancerous. When someone encounters an allergen, his or her entire body becomes inflamed. When someone attempts to accommodate physical, chemical or emotional stress, their entire body is affected, even if they have but one subluxation.

The point? Vertebral subluxation, joint dysfunction, fixation, spinal lesion, Phenomenon X, or whatever you want to call it, is a whole-body experience. Reducing it to a localized biomechanical disturbance of the spine that produces a pain syndrome is convenient but myopic. It is the same shortsightedness that afflicts much of the medical profession, which has divided the body into different parts and systems. Attending to the micro, while ignoring the macro, may be efficient but it’s hardly fulfilling for the chiropractor or patient.

When you accept the whole body effects of the adjustment and are able to interest the patient in using chiropractic care as a long-term lifestyle adjunct, you don’t rely exclusively on symptomatic improvement as a benchmark. Instead, you rely on far more significant markers, such as their self-reported sense of ease, resourcefulness, creativity, joy and happiness. Rather than episodes of pain in which you are the featured hero, you’re the vicarious witness to each patient’s potential, well-being and personal legacy.