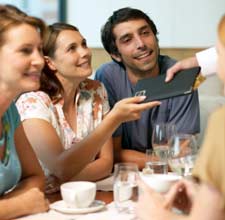 Last night at your favorite restaurant:

Server: “How about some dessert tonight?”

A few minutes later your server returns with the bill for your meal. You kind of have an idea about how much dinner should cost, but this time, you glance at the total before mindlessly handing over your credit card. Expecting something in the $90 range for the two of you, you’re shocked to see that the bill, before the tip, is $136.68.

You: “Excuse me, but there must be some kind of mistake.”

Server: “I’m sorry sir, what seems to be the problem?”

Server: “Oh, that’s to help pay for the Surf ‘N Turf for Two and the tiramisu that the couple at the table next to you ordered.

Server: “Didn’t you hear? Since good nutrition is a ‘right’ for every resident in the most affluent nation in the world, the government passed the Nutrition Reform Bill. The Meal Equalization fee is how we make it fair for everyone.”

You: “Help me get this straight. We enjoy a healthy meal of Caesar Salad, Chicken Marsala and South Atlantic Sea Bass, a glass of wine apiece and shun the dessert tray, but we have to help pay for what the couple sitting at the next table consumed?”

You: “But we didn’t even get to pick who was going to sit next to us or offer recommendations about the healthiest choices on the menu!”

Server: “Of course, but that’s how we make it fair.”

When I speak with colleagues in socialized Commonwealth countries who have grown up with taxpayer-supported “health care,” they will carry on about me being selfish or stingy for not willingly paying a bit more in taxes so that a civilized nation like the United States can extend “health” coverage to all its citizens.

First, I have serious doubts that it’s going to be a “bit more in taxes.” With as much debt that the current stewards in Washington are racking up, my guess is that the tax bite will be significant. Maybe crippling. We’ll see. Let me put it simply.

America was founded by risk takers, self-reliant individualists, and those willing to assume personal responsibility for their actions. Quick to help a neighbor. Generous when the plate is passed Sunday mornings. And meticulous about honoring property lines. Name an earthquake, tsunami, flood or famine and Americans, more than any others, will line up to send their money, their prayers or themselves to lend a helping hand. But force us to bail out those who exploit the system, abuse themselves, engage in dangerous lifestyles, or demand that I pay for their ignorance, recklessness or poor judgment, and my generosity turns to resentment.

This is why patient education, more than ever, isn’t a burden or an inconvenience, but a matter of national security.