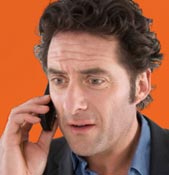 Once there were two chiropractors.

Mortimer, whom his friends called “Mort” or “Mo,” and Lester, whose close friends were inclined to shorten to simply Les. While Mort and Les practiced about 100 miles apart, from time to time they would check in with each other over the telephone.

Here’s a transcript of their recent conversation.

“Hey Mo,” asked Les. “How are your numbers doing?”

“Doing great,” replied Mo. “Naturally, I’m having to work a little harder, but the practice is doing well. How ‘bout you?”

“Not so well,” confessed Les. “The insurance companies are beating me up. The economy has patients on edge and, frankly, I’m having to dip into savings a little more than I’d like.”

“Yes, it’s definitely not business as usual,” observed Mo. “So, what are doing to turn things around?”

“Not much. I guess I’m waiting for some clarity so I’ll know what to do,” said Les. “With things as tight as they are, I can’t afford to make a mistake.”

“I understand,” replied Mo. “However, waiting, frozen like some deer caught in the headlights, would be a huge mistake. This is the time for bold action. Leadership!”

“Afraid I don’t feel much like a leader these days.”

“Remember, your practice is a reflection of you and how you see the future,” said Mo. “I hope you’re not watching the news or listening to talk radio.”

“Just the headlines in the morning when I’m getting ready,” confessed Les.

“Well there you go,” said Mo. “You’re starting each day by filling your brain with the same bad news, scandals and mayhem that puts patients into a hypnotic trance of caution and hopelessness.”

“I never looked at it like that,” confessed Les.

“You should be the most authentically upbeat, optimistic, enthusiastic person your patients ever encounter. That’s difficult to do if you’re wallowing in the same stinking thinking your patients are.”

“Okay, so stop watching the news. Got it. But what can I do to get things humming again?” asked Les.

“You’ll need to go beyond just the basics of delivering great chiropractic care, that’s for sure. You’re going to have to do more.”

“You mean like adding cold laser? I’ve been thinking about doing that,” mused Les.

“Not exactly. I mean, add it if you want, but that’s unlikely to turn your practice around. I’m talking about much more basic stuff. Stuff that you used to do, but stopped doing,” volunteered Mo.

“I bet you know at least a dozen things that you could do that would grow your practice,” continued Mo.

“Sure, I guess so,” said Les as his expression turned cloudy. “But I don’t want to do screenings and lectures and spinal care classes and all that salesmanship crap! That’s for newbie chiropractors just starting out. I’ve worked 12 long, hard years so I wouldn’t have to do all that!”

There. He said it. Out loud. And it was lying there. Like flies on two-day-old road kill. The stench of pride. The aroma of self-importance. The rotting flesh of arrogance.

“I just want it like it used to be. When I was busy, helping people and paying my bills,” yearned Les.

“But you can’t have your old practice back,” replied Mo. “Those days are gone. It’s a different world. Remember the definition of intelligence?

“The ability to adapt to one’s environment,” volunteered Les without hesitation.

“Right. The intelligent response to today’s practice environment is to adapt,” continued Mo. “That doesn’t mean you have to go out and do spinal screenings, but you’re going to have to do more than you used to do.”

“Well, like when was the last time you sent out a thank you card?” posed Mo.

“Got me there,” confessed Les.

“Just remember, expressing gratitude is the access point to even more blessings. When was the last time you said ‘please’ to a patient, as in, ‘Lie face down, please’?”

“Okay, I see where you’re going. Be nice,” dismissed Les.

“No, it’s much more than being nice,” retorted Mo with a laugh. “It’s about your heart. Patients don’t find it attractive when you forget you’re merely a servant and they’re the master. Regardless of the number of people who showed up this week, every one of them did so to get what they wanted—not so you could get what you wanted!”

Mo was on a roll and continued with a quick gulp of air. “If you want patients for your reasons, whether it’s to pay your bills, feel successful, be busy or whatever, patients can tell. You’re using them. If you do that often enough and long enough, your numbers will go into the dumper regardless of the economy or the generosity of insurance companies. When you’re selfish and make everything about you, it repels patients.”

The long pause that followed suggested that the verbal punch had landed and was being processed. Or, that Les had hung up the phone.

“Here’s the deal,” observed Mo as he broke the uncomfortable silence. “When everyone else wants to be less, do less and spend less, it’s time to be more, do more and spend more—whether it’s time, money or attention. That’s how you turn things around. It rarely happens any other way.”