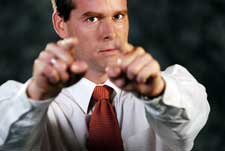 I had the good fortune recently of speaking before a chiropractic-coaching group. Before I went on, members broke out into small mastermind groups to create solutions to a list of about a dozen challenges offered up by the membership. While I was occasionally prodded for input, I did my best to defer, wanting to hear how these chiropractors proposed to solve the issues.

As a patient, I saw entirely different strategies than those presented by the doctors who had drawn their chairs into a circle to share. In fact, in my estimation, some of the solutions they offered could serve to worsen the very problem they were trying to solve.

I heard a consistent refrain that was even more telling. It revealed a boundary issue that seduces far too many chiropractors to encroach upon patient territory. It exposes a common source of chiropractor fatigue. It was apparently such an accepted notion among chiropractors that, when mentioned, didn’t prompt even a raised eyebrow from anyone but me.

And by the way, these sentences were NOT being completed with phrases such as “...enjoy life to the fullest.” Or, “...equip patients to make choices for themselves.” Or, “...choose care that’s congruent with their value system.” Nope. None of that. It was far more parental, controlling and manipulative. As in “I want to get my patients to accept the idea of chiropractic as a lifestyle at that first visit.” And, “I try to get patients to accept wellness care from the very beginning.”

These chiropractors apparently overlooked the notion that what patients do is none of their business. Invest your life spirit in outcomes you can’t control, such as what a patient thinks, believes or does, and you have a recipe for doubt, anger, resentment and, finally, burnout.

I assume their intent is to save patients from themselves and advance what they think is in the patient’s best interest. How sweet. However, this crosses an invisible line. Do so and you’ve set yourself up for a constant source of frustration and a practice that must be kept small enough so you can micromanage every patient who, at least until they feel better, is willing to put up with your helicoptering.

Naturally, you have an obligation to put together a care plan designed to produce the best results in the shortest amount of time. Without question, you have the obligation to explain the nature and severity of their situation so they can make appropriate decisions about their care—even if they’re not the ones you would make. And there’s the rub. You may have been deceived into believing that if patients “disobey” you, or overrule your recommendations, that it’s somehow your fault. Or a poor reflection on your clinical skills.

It’s a common tale. You chose health care as a career path. So, you probably place a high value on your health, doing countless things to present yourself as someone who walks the talk and has drunk the Kool-Aid. Health and hygiene are probably among your top 10 core values. Start a new relationship with a patient who holds 30 or 40 other things more valuable than their health, and seeing your vision for them actualized is far less certain.

If this is true, then there is a related issue you’d probably want to be aware of. And that’s there is nothing you can say or do that will change the value a patient places on his or her health.

In case that didn’t register, let me repeat. There is nothing you can say or do that can change the value a patient places on his or her health.

However, that doesn’t stop many chiropractors from trying!

Oh sure, you can guilt patients into taking action for a season. If you’re especially manipulative you might be able to shame them into doing your bidding. Or, if you’re particularly ambitious, you can attempt to reason with them, presenting a rational, intellectual case for lifetime care or whatever else you have in mind. (Reports that last 20 minutes or longer are often symptoms of this ill-founded belief.) Even then, many patients will nod as they feign interest, eventually ignoring your brilliant case.

Of course not. But it’s a plea to lighten up and lose the “I-have-to-get-patients-to-_______.” It’s killing you and your practice. Yes, explain what’s going on. Give them a new meaning for their symptoms. Tell the truth about your intentions to arouse their body’s ability to self-heal. Inspire them with the possibilities that could result from your care. Create the hope of a better tomorrow.

But should patients turn up their noses, lose their way or choose not to fulfill some or all of the vision you’ve presented, it might produce some momentary sadness. But it would pass. And then you’d become fully present so you could serve the next patient who does share your vision. And the next. And the next.

It’s how large practices get that way.