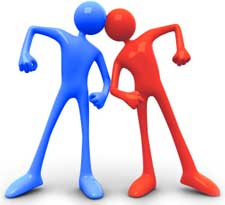 Seems that the phrase “evidence-based” is showing up with increasing frequency these days. I think I know why. And it isn’t just a reverence for things scientific. I think it’s just the reverse. Instead, it’s a sign of one of the most pervasive problems these days: an unwillingness to take responsibility.

In other words, if you worship at the altar of scientism, you don’t have to perform the taxing obligation of critical thinking – not if you depend solely on the sacrament of the double blind randomized clinical trial as your guide for whether something is true or not. Instead, this form of reductionist thinking makes it easy to dismiss the metaphysical in favor of a purely linear, mechanical view of the body. Convenient, but naïve.

The problem of this limited worldview, and that’s what it is even though it sounds progressive and enlightened, is that it ignores outlier data that doesn’t fit neatly in the box.

Ask the evidence-based crowd to prove the existence of a sense of humor, imagination, or the spirit and the shortcomings of their trusted tool become glaringly obvious. But there’s a far deeper problem than what someone of this mindset will accept as evidence.

Those who fall prey to the evidence-based scotoma ask for “proof” that chiropractic treats scoliosis, sciatica, headaches or any one of a hundred named health complaints. And while it seems like a reasonable request, the premise is wrong. Because chiropractic doesn’t treat anything!

This isn’t merely a semantical sleight of hand. Treating diseases (or even subluxations) is the practice of medicine. And while countless chiropractors unknowingly practice medicine, nevertheless, chiropractic is the discipline of reviving the body’s ability to self heal by removing nervous system interferences. This distinction is profound and has far-reaching implications, requiring the aforementioned critical thinking that so many seem allergic to.

If the practitioner has been deceived, or has taken the path of least resistance and practices chiropractic medicine, evidence-based or not, chiropractic degenerates into a low-tech therapy for mechanical back pain. For them, adjustments (or more likely, manipulations) seem far too insignificant to address the patient’s problem. No wonder there’s a movement to increase the scope of chiropractic practice to include drugs and injectables (and get the reimbursement that real doctors get). Apparently, the adjustment and reviving the body’s ability to self heal just isn’t powerful enough!

If after 10 years or longer in practice, you’ve found yourself still wanting for new patients (after having helped thousands), I know at least two things about your practice:

1. You’ve been practicing chiropractic medicine, treating symptoms with a likely prescription of three doses of adjustments a week for the first four weeks, and

2. Your poor patient communications have led patients to believe that you’ve treated their symptoms rather than unleashing their ability to self heal.

It’s a common tale. And while you can’t do much about the missed opportunities of the past, you can certainly change the future.

Step 1. If you find yourself in this hole, stop digging! Become crystal clear about what is your responsibility in the relationship and what is the patient’s. Clean up your language and abandon your use of the word “treatment,”as in “I have two treatment rooms.”

Step 2. At your consultation and/or report of findings, make certain that at a bare minimum every patient knows these key distinctions:

Step 3. Deflect all credit or blame for the results that manifest when you add energy at opportune times and places along the spine to reduce nervous system interference. Make sure every patient understands that a chiropractic adjustment, like the ignition key of their car, merely unlocks the potential that is already in them.

What more evidence is needed than the millions of people living better lives after having their vertebral subluxations reduced?