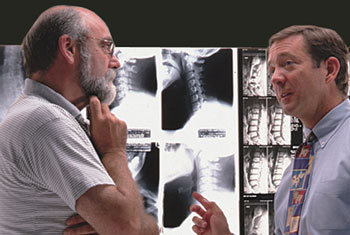 Besides your initial first-visit patient consultation, your patient report of findings is one of your most important patient communications. Yet, many chiropractors neglect to give a formal report.

That’s probably due to the reputation that patient reports are merely a manipulative sales tactic.

Let’s not do that.

Instead, let’s frame the chiropractic report of findings as a method to fulfill your obligation to provide clear communications and set appropriate patient expectations.

Patients interrupt their busy lives to see you because something is amiss. Whether we like it or not, most patients try a medical solution first, usually medication. They see you because the medication is no longer working or its side effects have become intolerable. Or maybe they've been threatened with surgery or simply told to learn to live with it.

Give a formal report of findings. Even if it’s merely a five-minute affair in front of the viewbox. Your objective is to give a new context and meaning to their symptoms. If you seem to take their problem casually, they are inclined to do the same.

Most patients think their pain is the problem. After all, that’s what has brought them to your practice. Your mission is to reframe their symptoms as the sign of deeper problems—much like the piercing sound of a smoke detector or the check engine light on their dash. Their symptom is merely a language their body uses to announce a limit has been reached and a change is necessary.

Most people think of chiropractors as back doctors. Help patients understand that your interest in the spine is because it’s the most vulnerable part of the brain-to-body nerve communications that permits them to function.

Many chiropractors use an actual safety pin to explain the efferent and afferent nerve communications (safety pin cycle) responsible for regulating the entire body. Help patients appreciate that what appears to be a stomach problem may actually be a brain-to-stomach or stomach-to-brain nerve communication problem. It may appear as a stomach issue, but its malfunction could be neurological rather than organic.

You might want to explain this nerve interference as the result of a stress overload to their body. “Of the three stresses, physical stress, chemical stress and emotional stress, any idea which one could be the cause of this particular health issue?”

Be prepared for a blank stare. That’s okay. Seeing the world in a new way often produces this effect.

3. Explain the Full Nature and Severity of Their Problem

Most patients imagine their spinal problem is like a cold, an infection or some other self-resolving health issue. They expect a beginning, middle and end. But many problems, especially long-standing spinal conditions are unlikely to permanently resolve.

Do you believe that?

The longstanding bio-mechanical problem has produced muscle and ligamental damage and in many cases, even bone remodeling. Their body has been adapting to their car accident six years ago or the birth trauma of 43 years ago. If the growth plates are no longer present, you probably have an adult whose spine has a permanent weak link. It’s unlikely to ever be fully “fixed,” even if they enjoy symptomatic improvement.

Instead, they have a spinal “stain.” Chiropractic care can help support and manage their issue, but return their spine to a pristine condition? Unlikely.

Neglect this physiological truth, and you’ll be blamed months later when their problem returns. "I tried chiropractic, but it didn’t work." Hardly fair, but that’s what prompts many to pursue acupuncture, massage or some other healing modality rather than return for another episode of your care.

4. Answer the Question “Can You Help Me?”

One of the most essential ingredients of the healing process is hope. This is far more than the placebo effect. The key is to invoke hope without guaranteeing a cure or over-promising what chiropractic care may or may not accomplish.

“It looks like you’re an excellent candidate for chiropractic care.”

“We’ve helped a lot of patients with problems just like yours.”

“I think you have every reason to be hopeful that we can help you.”

“I'm optimistic--you should be too.”

This assessment, on the heels of what many patients report as the most thorough work up that they’ve ever had, begins the healing process even before their first adjustment.

5. Give Meaning and Majesty to the Chiropractic Adjustment

Assuming that your primary form of intervention will be the chiropractic adjustment, you’ll want to give it the proper context.

This isn’t so much about technique as it is about the intent of your adjustments. Without an explanation, patients will assume that your adjustments will be treating their symptoms. That’s convenient and even congruent with their linear, medical indoctrination—but incorrect. As you will see, allowing this unstated belief to stand produces all manner of problems later.

One way to explain your adjustments is that you’ll be "adding a precise amount of energy at just the right place and time along their spine," and their body will use that energy to “right itself.” It’s this partnership aspect that is so important. It’s not you single-handedly fixing them. Yes, you artfully add energy at opportune times and places, but it’s more than that. How their body uses, or doesn’t use, the energy you deliver is outside of your control.

Neglect this distinction and you’ll get the credit when you heroically reduce their symptoms. But you’ll also take the blame when you don’t. Worse, you'll constantly wonder if they are still onboard with your recommendations.

A related issue is that a series of adjustments will be needed to make the necessary spinal changes to reduce the nervous system interference. You’ll explain that retraining the muscles and soft tissues takes time and requires repetition. If you’re inclined, explain that if the visit frequency is too far apart, there isn’t enough momentum to produce a healing effect. And if it’s too frequent, their body will be still processing the previous adjustment. Your recommendations are based on finding the sweet spot between both extremes.

By telling the truth about what you’re actually doing, a huge burden is lifted from your shoulders. You’ll no longer be responsible for something beyond your control.

6. Healing Is a Process and All Processes Take Time

Without the proper context, patients think your “prescription” of three visits a week will produce the symptom-free effect they seek. In other words, they think you control the speed of their recovery.

Turns out, the speed of their recovery depends on countless factors outside of your control—their age, type of problem, how long they’ve had it, willingness to follow your recommendations, lifestyle improvements and much more.

The truth is, not only do they control the speed of their recovery, but its pace reveals more about them and their overall health potential than what you’re doing.

Avoid the crystal ball gazing and projecting when they are likely to be feeling better. Granted, doing so is a real patient pleaser—as is abdicating your authority and suggesting, “Let’s give it a couple of weeks and see how it goes.”

The truth is, you have little certainty about how their body will respond to your care. Yes, let them know that they have a problem that will likely require some type of ongoing supportive care for the rest of their lives—if they do. It might sound like this:

“The pictures of your spine reveal that you’ve had this problem far longer than since last week when you bent down to tie your shoes. In fact, you have a problem that will likely require some type of ongoing supportive care for the rest of your life—just like you intend to brush and floss your teeth for the rest of your life. We can talk about what that looks like later on.

“For now, let’s take this aggressively, seeing you three times a week. After four weeks—that’s 12 visits—I’ll conduct a progress examination, performing some of the same tests we did yesterday. We’ll compare where you are with where you were, and then together, you and I can chart a course forward that makes sense for you and your health goals.”

7. Explain the Financial Implications of Their Care

As with losing anything valuable, there is a cost to recovering one’s health.

The key is to avoid projecting your own economic circumstances onto patients, or worse, shortchanging them because you suspect that they can’t afford your fees. Make your care recommendations based on what you would recommend to a loved one.

Perhaps one of the most mentioned complaints among chiropractic assistants is the stress created by trying to administer inconsistent fees. Every compromise and every exception creates additional complexity and room for misunderstanding.

And let’s not forget the patients who can’t afford to come in three times a week but can come in once a week.

This is a huge topic that will not be resolved here. However, be mindful that paying for care is part of the healing process. Without a fair exchange, patients often lack commitment, tend to get poorer results, have less respect for you and rarely refer. This is especially true for those whom you allow to run up large outstanding balances.

Ultimately, your chiropractic report of findings sets the tone of the relationship. Too casual, or nonexistent, and patients are likely to devalue their care and show little respect for you, your clinical skills or even your appointment times.

The reverse is also true. We all tend to rise to the expectations of others. When you demonstrate respect for what makes chiropractic different from medical treatment, patients are more likely to as well.